I love stories about witches. And as the winter deepens, and we move past the longest night of the year, in Scotland we’re looking expectantly for the ice and snow that arrives at the beginning of the new year.

Naturally, my thoughts turn to the women of folklore who live in great palaces of ice, frost sparkling from their fingertips, seen only by travelers willing to brave frozen boots and reddened noses… 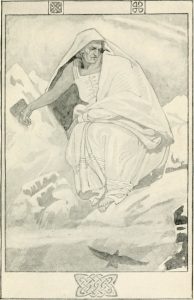 In Scottish folklore, the goddess of winter is called Beira. The name was given to the Cailleach Bheur by 20th-century folklorist Donald Alexander Mackenzie in his Wonder Tales from Scottish Myth and Legend. In Mackenzie’s tale, Beira is not only the personification of winter, but the mother of all the gods and goddesses in Scotland, depicted as a one-eyed, blue-skinned hag.

A creator goddess, Beira was said to have built the mountains of Scotland using a magic hammer, with Ben Nevis as her mountain throne.

Beira reigns undisputed throughout the winter, a true winter witch queen, but variations of the tale tell of how her reign only ever lasts until the spring.

In one version, she visits the Well of Youth on the Winter Solstice, and grows younger and younger until the spring time.

In another she seeks the love of a hero, which transforms her into a beautiful young maiden, the personification of spring.

In yet another, Beira carries a magic staff which can freeze the ground. In the springtime, she throws her staff under the holly and the gorse bush, transforming herself into a gray stone, which marks the end of winter. 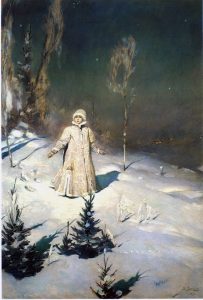 The snow maiden, or Snegurochka, is a character in Russian fairytales.

It is difficult to trace the roots of this folk tale, but there are many variations of this myth, depicting Snegurochka both as the character of the snow childn, and the snow maiden.

In the versions in which she is portrayed as a maiden, she is said to be the daughter of Grandfather Frost (also known as Ded Moroz, a legendary Slavic figure who brings children presents on New Year’s Eve) and Spring-Beauty. A maiden made of snow, she longs to live with humans but cannot fall in love. Her mother eventually takes pity on her and gives her the gift of love, but when the snow maiden falls in love with a shepherd, the new warmth of her heart means that she melts, and is no more.

In later versions of the tale, the maiden is said to be the granddaughter and helper of Ded Moroz, with hair and skin as white as snow. 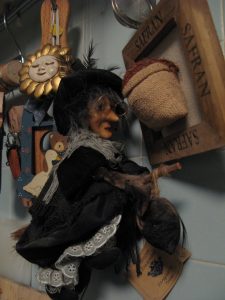 On January 6, La Befana will visit Italian children for Epiphany, the day the Wise Men were said to have brought their gifts to Jesus.

La Befana is a witch who travels the world by broomstick the night before Epiphany. Like another more famous Christmas figure, she delivers presents and sweets to children who have been good, and lumps of coal to children who’ve been naughty. Unlike her more famous counterpart, she prefers wine and sausage to milk and a mince pie.

Like many mythological figures, stories of La Befana are likely to have come from a mix of Christian and pagan tales.

A popular theory is that her name derives from the Latin word for Epiphany, Epifania, and according to some legends, the Wise Men stopped to ask her for directions and invited her to join them, only she refused. Later on, when she saw a bright light shining in the sky, she decided to follow them, but she got lost and never found the manger.

Meanwhile, Italian folklorist Garlo Ginzburg suggests that La Befana is an evolution of Perchta, an Alpine goddess traditionally represented with two forms: a beautiful young woman with skin pale as snow, or a hag.

In this tradition, her hag form represents the “old year” that has passed, ready to give way to the new one, and in many countries across Europe there is still a tradition of burning puppets of old women at the beginning of the New Year.

I guess not everyone loves witches as much as I do…

Who’s your favorite winter witch? Is there anyone you think I’ve missed from the list? Let me know at hello[at]helenarookwood.com!